Since 2019, the THOCA team has been reinvestigating the loess-paleosol sequences on the Khovaling Loess Plateau. New archaeological excavations were carried out leading to many more artefact finds. In addition, samples were collected for different methods in order to establish an independent chronology for these sites and to reconstruct paleoclimatic and paleoenvironmental conditions.

One of the key geochronogical tools that will be used in THOCA is luminescence dating. Optically stimulated luminescence (OSL) signals from quartz and feldspar minerals in the loess are used to establish a chronology for the loess-paleosol sequences back to ~250,000 years. The method determines the last exposure to sunlight of these mineral grains. In the case of archaeological layers, it is confidently assumed that this event is close in time to the abandonment of the site by the humans.

The samples must not be exposed to daylight during sampling. Therefore, steel or plastic tubes (~5 cm diameter, ~25 cm long) were hammered in freshly cleaned sections . It is also possible to dig a pit and take sediment samples in dark conditions after covering the pit with a non-transparent tarpaulin. In total, about 500 OSL samples were taken for THOCA project and they will be pre-treated in the new lab at the Ahmadi Donish Institute of History, Archaeology and Ethnography National Academy of Sciences of Tajikistan in Dushanbe. These procedures significantly reduces sample size and thus international shipping costs. Laboratory conditions are those of a photographic dark room laboratory. Further processing of the samples and measurement of their OSL signals and their natural radionuclide concentrations (Uranium, Thorium, Potassium) and final age calculation will be done that the Nordic Laboratory for Luminescence Dating (NLLD, Department of Physics, Technical University of Denmark, Risø campus, Roskilde) . Luminescence dating is highly reliable for loess and for 4 sections of Tajikistan Loessic Paleolithic this method will allow creating a numerical and detailed chronology for dust sedimentation and paleosol formation. The luminescence ages will be incorporated in a new chronological framework together with radiocarbon ages, cosmogenic radionuclide ages and palaeomagnetic tiepoints. 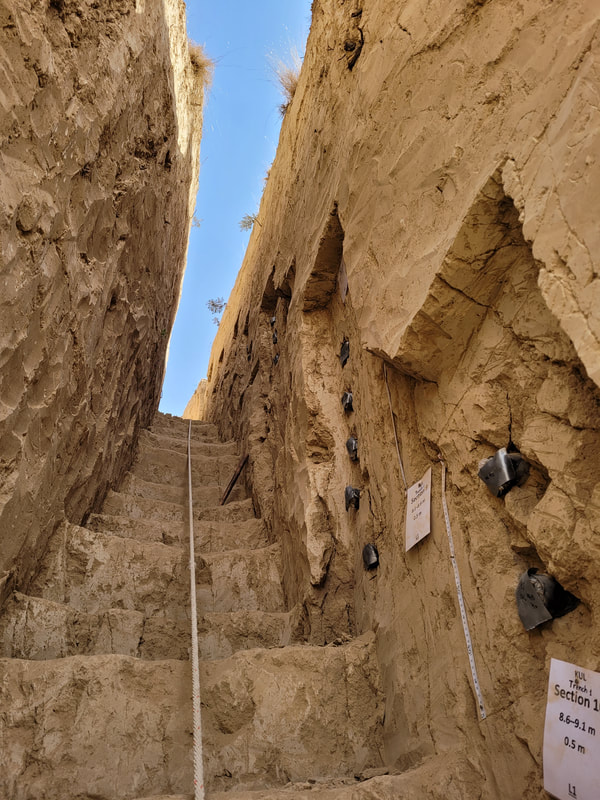 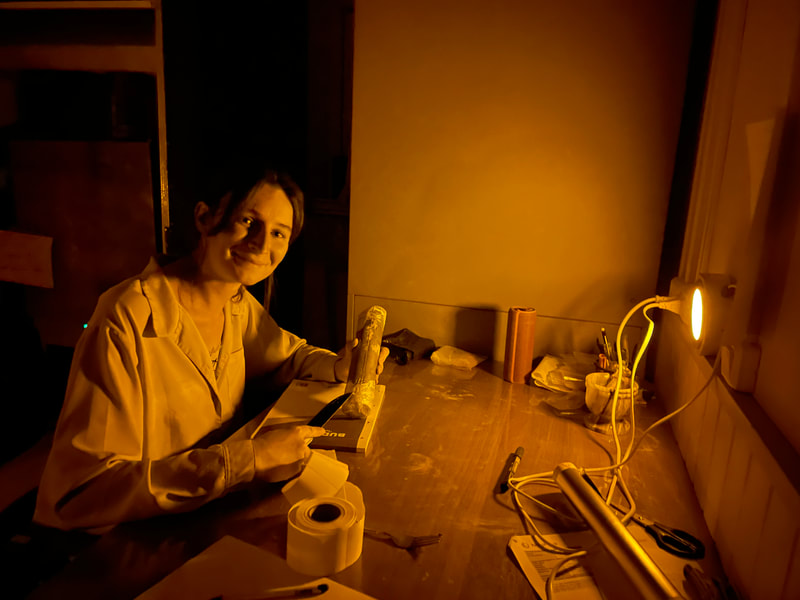 Pre-treatment of OSL samples in the new lab at the Ahmadi Donish Institute of History. 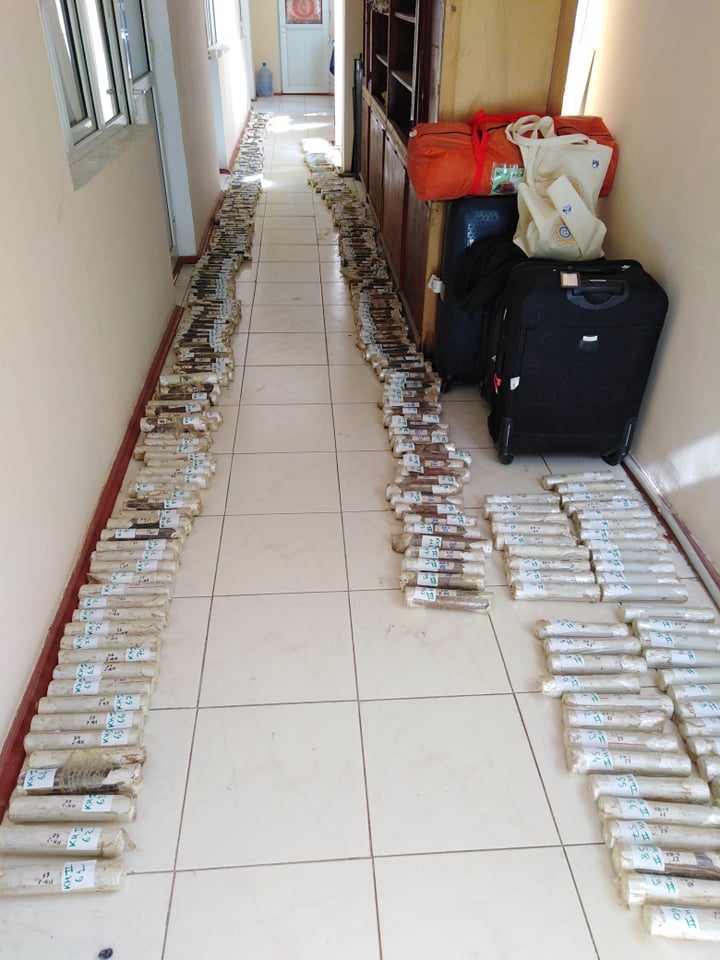 In the history of the Earth's magnetic field, reversal events (when the magnetic poles trade places) and excursion events ("failed reversals", when the pole could reach the equator, but then returned back) are known. With the help of reversals and excursions, the ages of which are often well known, independent restrictions on the ages of various intervals of the sites can be obtained. The reasons and mechanisms that trigger these events are still not fully understood. The loess-paleosol series of Tajikistan, which are the most complete and detailed continental archives of information, can help us gain knowledge about this. It should be noted that the strength of the Earth's magnetic field weakens during magnetic events, and this reduces the protection of the Earth from cosmic radiation. Subsequent increase in the flux of high-energy particles should inevitably affect the biota and, possibly, partially cause mutations and evolution.

Oriented rock blocks are being sampled to study the paleomagnetic characteristics of rocks. The bedding elements of the blocks are determined by magnetic compass, that make it possible to restore its field orientation in the laboratory. To construct magnetostratigraphic scales of the studied sites, we sample a block every 50-100 cm, and intervals with the recording of magnetic events (reversals, excursions) are being sampled continuously. Further, in the laboratory of the Ahmadi Donish Institute of History, Archaeology and Ethnography National Academy of Sciences of Tajikistan in Dushanbe, the blocks undergo initial sample preparation – we cut out cubic samples with a side of 2 cm, which can already be directly measured on the equipment. Sawing of blocks is carried out both using a hand saw according to the "classical school", and on a specially designed sawing machine, possibly the first in its history to work with loess. Further measurements of the magnetic characteristics of cubic samples are carried out in the laboratory of the Main Geomagnetic Field and Rock-magnetism of the Schmidt Institute of Physics of the Earth of the Russian Academy of Sciences (Moscow, Russia). We study the record of the natural remanent magnetization in rocks and carry out an additional complex of rock-magnetic studies, such as: measurement of the anisotropy of magnetic susceptibility, frequency and temperature dependences of magnetic susceptibility, hysteresis parameters, and others – in order to substantiate the distinguished magnetization components. It is also possible to measure the relative paleointensity of the magnetic field (AARM). 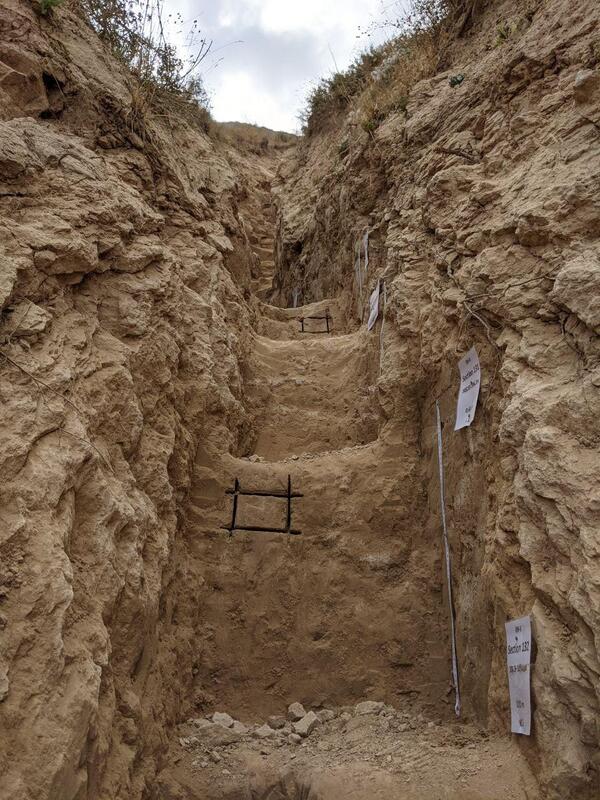 View on the Khonako II site with marks of future blocks. 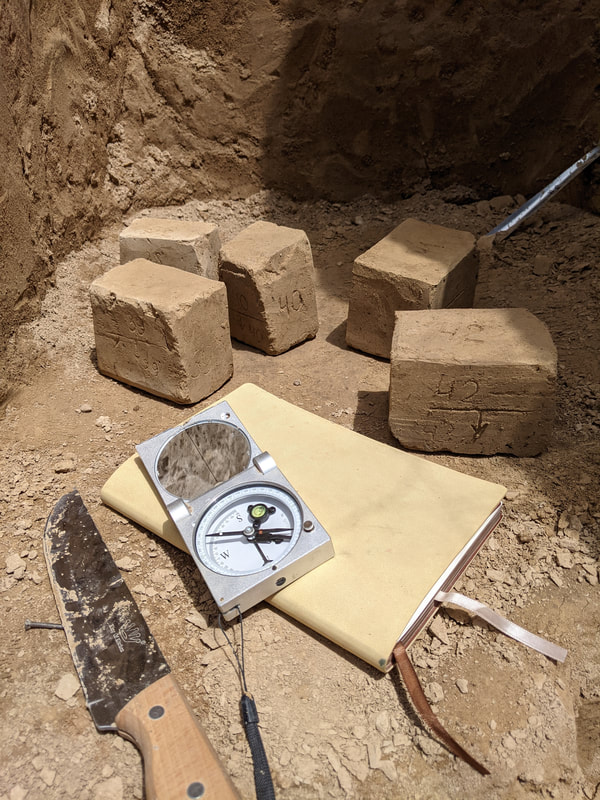 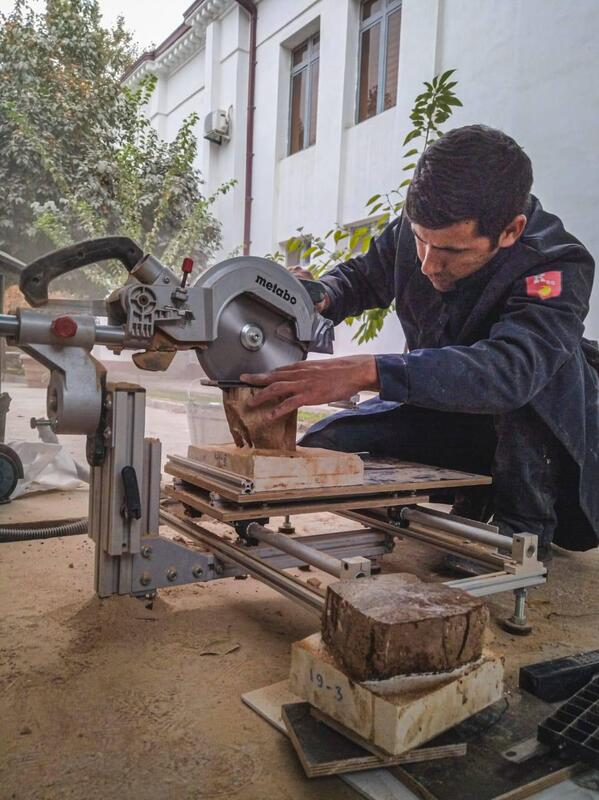 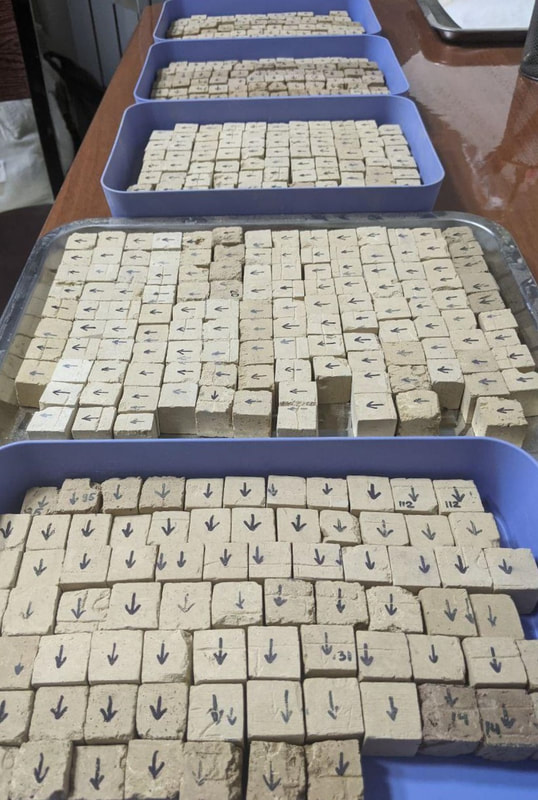 Paleomagnetic cubic specimens are ready to be measured.

PAST CLIMATE AND SEDIMENT TRANSPORT

Loess can tell us lots of information about past environmental conditions, leading many to call it the best land based past climate archive we have. The THOCA team will be using many techniques to get the heart of understanding the climate experienced by past humans at the time of loess formation. Linked to that is the study of sediment source. If we understand where the particles of broken up rock that form loess come from, we can understand the processes that transported it to our study areas, and determine what type of environment caused the formation of these dust particles. Below we summarize some of the key techniques we will apply in the THOCA project, at Moscow State University and Uppsala University.
Anisotropy of Magnetic Susceptibility (AMS)

Since loess is a wind-blown type of sediment, we already know that the climate must have been windy at the time the loess got to the sites that we are investigating. But from which directions did the wind blow? Where did the small particles come from that form the thick deposits? Answers to these questions allow us to understand the nature of atmospheric circulation that occurred in the past.
​
One way to shed light on these questions is by measuring the orientation of sediment particles under a magnetic field applied in the laboratory. This technique is called Anisotropy of Magnetic Susceptibility (AMS). It is based on the principle that different materials, and therefore also mineral grains, can acquire magnetization when they are placed in a magnetic field. In short, magnetic susceptibility measures how magnetic a sediment becomes under an applied field. Crucially, if the individual grains in a sediment deposit have a preferred orientation, then this property can be measured under AMS. Preferred orientation of magnetic particles in loess can often provide us with information about past wind directions. This is because small sediment particles can align with the direction of wind transport. To get reliable results, we measure the geographical orientation of the AMS samples in the field. Usually, they are taken as large blocks (ca. 10 cm x 15 cm x 5 cm) to avoid disturbance of the internal orientation of the grains (the so-called fabric). These blocks are cut into small 1 cm3 cubes in the laboratory, which are used to measure AMS.
Sediment sourcing

Additional information about the wind direction, and also the source areas where the particles originated from, can be obtained from the grain size and mineral composition of loess. This is because average grain sizes tend to become finer with transport distance from the source area as the larger the grains are, the faster they sink to the ground. Mineral composition can also be used to trace where the grains originally came from, because different sediment and rock types have individual mineralogic compositions. When they get broken down to small fragments, these particles will inherit the original composition. By comparing sediments such as loess with different rock types from potential source areas, it is often possible to determine where the loess is coming from.
​
A more in-depth way to pinpoint the origin of these loess particles is by using uranium-lead dating on individual grains of the mineral zircon, found within the loess. The crystal structure of zircons incorporates uranium (U) on formation, but not radiogenic lead (Pb). However, we know that the U found in zircons decays with a specific half-life time and forms Pb. Therefore, we can assume that all the radiogenic Pb found in zircons forms solely due to radioactive decay of U. Based on this assumption, we can calculate the formation age of the zircons from the half-life of the U-Pb decay series and the amount of Pb found in the zircon grain, and this can be matched to ages of zircons in potential source rocks to tell us about possible loess sources. Since the individual zircon grains in a loess deposit might come from a range of different source areas, we need to apply this technique to many individual grains to determine a reliable age distribution for the deposit. The THOCA team intends to apply this technique to samples of loess from the three sites and to sediments in potential source areas around Central Asia. 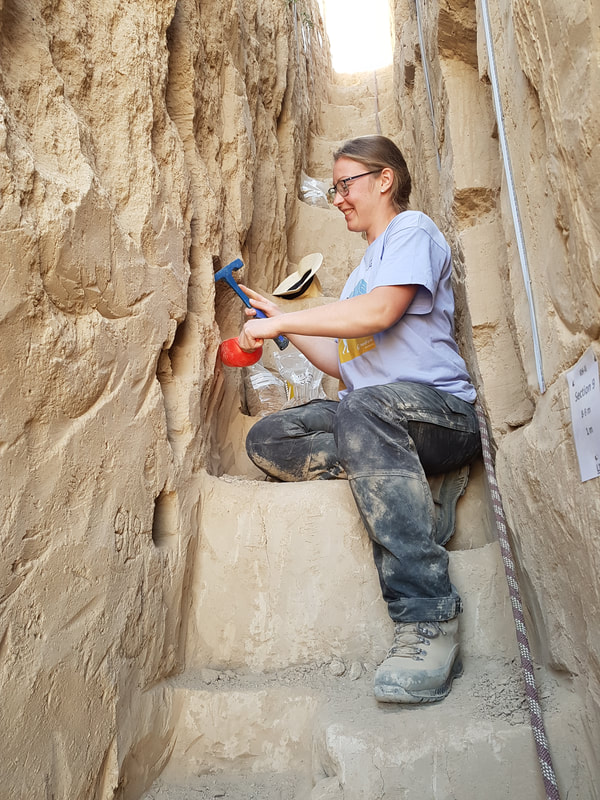 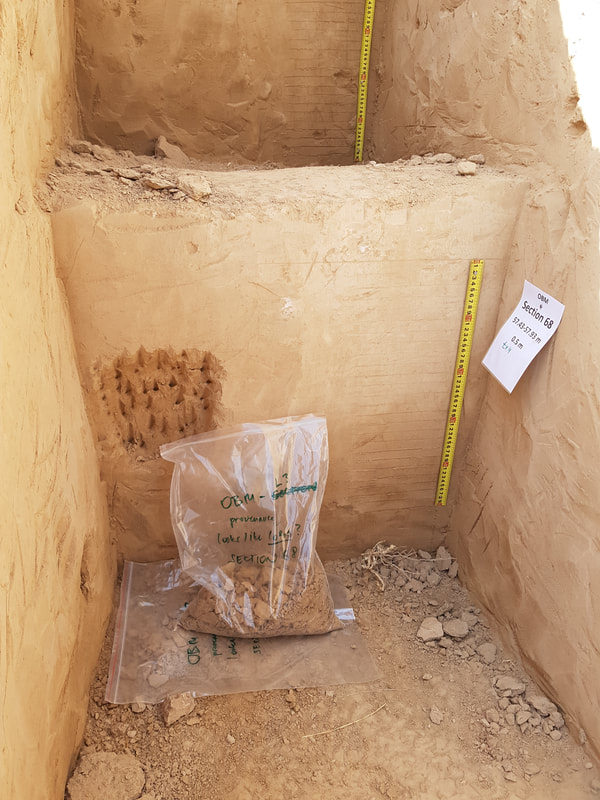 Important to understand the ecological conditions surrounding archaeological sites, organic chemistry will be used to reconstruct the land cover conditions and numbers of people living (or, rather, pooping) at the sites. We will look at isotopes of carbon and nitrogen from the soils as well as trace elements of phosphorous as indicators of open grassy or closed forest environments. Other biomarkers come from our faeces, which include steroids and bile acids that are specific to animal species (including humans!). Finally, we will look at microscopic traces of charcoal trapped in the sediments that are evidence of past fires and can tell us whether the fires were from grass or trees and even whether they were started by humans or were natural events.

When plants undergo photosynthesis, they create sugars by splitting the carbon from oxygen in carbon dioxide. About 1 out of every 100 of the carbon atoms they take are the heavier form of carbon known as carbon-13 (13C). Trees and forested environments, generally, discriminate against the heavier 13C isotope and prefer the lighter 12C isotope. Grasses and trees that take in a lot of sunlight discriminate less against 13C. When the plants die, their organic matter decomposes as humus and eventually becomes part of the soil. The soil is like a time capsule for us to look at different ratios of trees and grass living on the landscapes of the past.
​
Biomarkers are chains of carbon, often attached to hydrogen and oxygen and other atoms. They are present in all living tissues of plants and animals. In the case of faecal molecules, they form when the cholesterols we ingest in our foods are broken down into simpler forms for digestion. When the chemical bonds that bind sugars are broken down, the reactions create energy, which we use to walk, talk and even think; some of it is stored for later use; but most of the matter is turned into compounds called steroids, which we excrete in our faeces. The chemical reactions are generated by bile acids, and the arrangement of the bile acids vs. the types of steroids are specific to different types of animals. Like the isotopes, the faecal matter is broken down in soil and can later be studied in their primary molecular forms. Most useful for us is that the more an animal (or animals) poop(s) in a location, the more molecules there tends to be, so we can use the molecules to give us a rough idea of how many organisms of different species were living (well, pooping, which is part of life!) in one area. We are going to look at these changes over time along with black carbon from fires and n-alkanes, which are another way to tell if there were trees or grass in an area.

Put together, the organic chemistry will give context to the other aspects of the project so we can really understand how humans changed or adapted to the ecological conditions of Central Asia over the last several hundred thousand years. 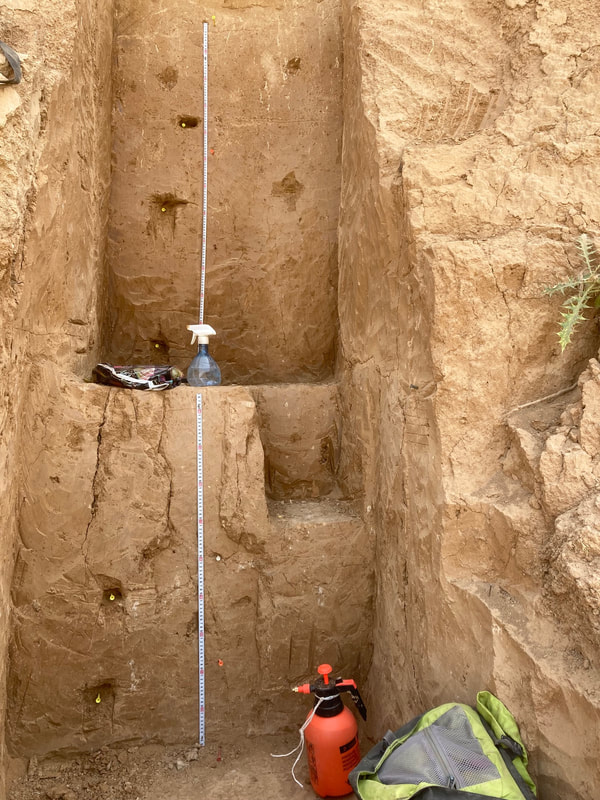 Section prepared and sampled at Kuldara in October 2021. 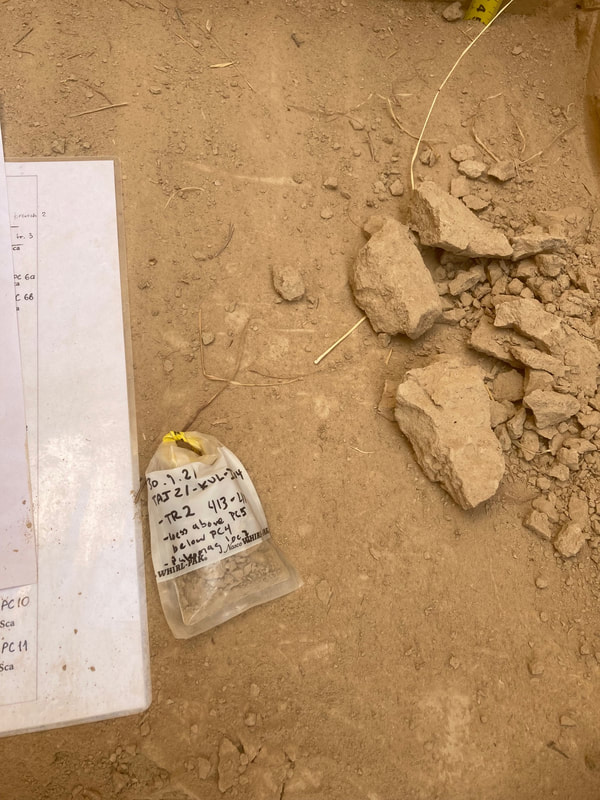 Sample collected for stable isotope and organic biomarkers analyses at Kuldara in October 2021. 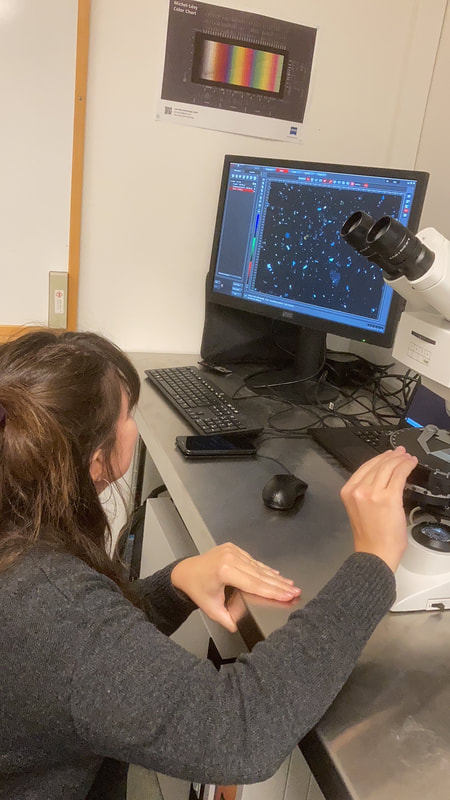 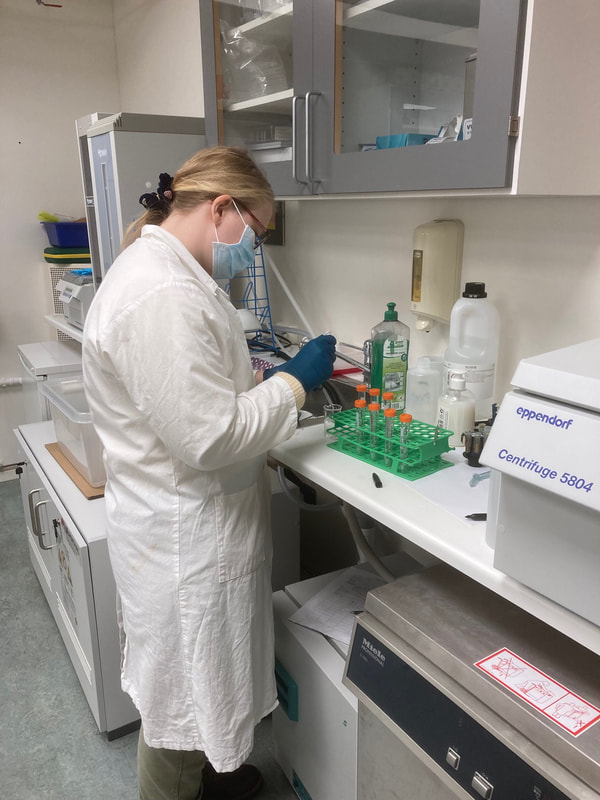